Far From Twice As Nice

You are here: Home / Family Life / Far From Twice As Nice

Since Little T is not going to use his school uniforms, we thought we’d try to get rid of them. Craigslist was a bust after listing them for a few weeks so we thought we’d give Twice As Nice a shot again. I’ve had a few bad experiences with them in the past but I am not past giving them another shot. We gather up the uniform tops and bottoms and head out. I put the clothes up on the trade shelf and began to browse. I notice they have uniform tops similar to what i brought in so that makes me think they’ll take them. The lady said they were looking for winter clothes but I wonder if uniforms might be different. After a few minutes of browsing, the lady catches our attention and motions for us to come back.

We walk over and, she says they won’t take any of them. My mouth drops. She says we can hold on to them and try later if we want. I tell her we’ll go sell them somewhere else and won’t be coming back. This is not the first time I’ve had trouble with them.

A few years ago, I had a few large boxes of infant clothes and some infant items to get rid of and tried them. The clothes were barely used and some even had tags on them. They rejected all but a few items. And the amount they wanted to give for the few items wouldn’t even allow me to buy one item in the store. I kept all the items and gave them away to families that I knew. I just don’t know why anyone would shop at Twice As Nice when their prices are about the same as stores. I don’t see a reason to pay the same price for a used shirt that I can get a brand new shirt for not much more. I don’t think I will be going back to Twice As Nice anytime soon.

Oh and if anyone is in the market to buy some uniforms, let me know. I have red polo tops and tan shorts to unload. 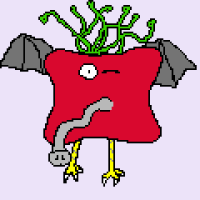 Angi grew up in southern Arizona but now lives in central New Mexico with her husband, two sons and four dogs. She creates, she responds to Yoast support requests, and she loves to ramble on about anything. When not doing those, she can be found slaving over the kitchen stove cooking for her family, curled up with a good book or watching any one of her favorite TV shows.