Many years ago, back in the ’80s, back to the time when I was young and before I had kids, I fell in love with an alien. Gordon accidentally crashed his spaceship into the garage of the Tanner family as he was fleeing his home planet which just happened to be exploding. He was lost in our world as you would expect from any alien life form. The Tanner family took him in and taught him our worldly ways. Every Monday night, you could find me watching the high jinks of my new found love. He gained a hugely popular nickname, Alf. Maybe you knew him, maybe you fell in love with him, too. Who couldn’t resist that alien charm?

A furry alien wiseguy comes to live with the Tanner family after crashing into their garage.

And apparently – in case you didn’t know – the love of an alien can be passed through the umbilical cord to your child. At least that’s what I’m claiming. Little T stumbled across my Season 1 ALF DVD set and instantly felt the charm through the case. I put in the first disc and he was hooked immediately. I shared everything I knew about ALF but it’s been a long time since I thought about the little furry guy so my knowledge was a little clouded. We watched the first few episodes together but yearned for more.

After watching season 1 and 2 many times over, I broke down and told Little T that there were two additional seasons plus two cartoon shows all dedicated to our lovable alien friend, ALF. He was beyond thrilled when he received season 3 and 4 for his birthday this year. In fact, he has watched every episode across all four seasons plus a few bonus episodes provided with each set.

Did you know these facts about ALF?

And mom is beyond happy listening to ALF and replaying her childhood. Yesterday at breakfast, Little T and I played question and answer with all questions about ALF.

What is ALF’s real name? 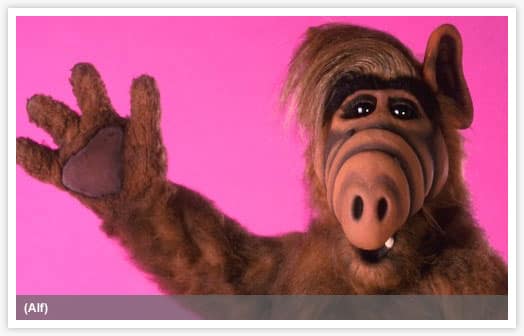 What planet is ALF from?

What is ALF’s planet made of?

What does ALF love to eat?

Who are ALF’s best friends?

What is the family’s last name?

What was ALF’s girlfriend’s name?

If you have no idea who I am talking about, I’ll leave you with a video of some great moments compiled by Sarge561.

If you made it this far, you get a bonus! Did you know there is an ALF movie? If you’ve watched the entire series, you’ll know that Alf ends with a cliff hanger. The movie, aptly named Project: Alf , is a half-hearted attempt to provide a conclusion to the series. And while the movie is great fun, it has little to do with the actual show.

Captured by the Alien Task Force, ALF was rescued by two officers who found out that the project shall be canceled – and also ALF.

[…] you with a video (if you’re getting this in RSS or email, you may need to come on over to watch the video) of some great moments compiled by […]

I love ALF, I might have to see if my son likes it too

Haha!! Thanks for the memories!!