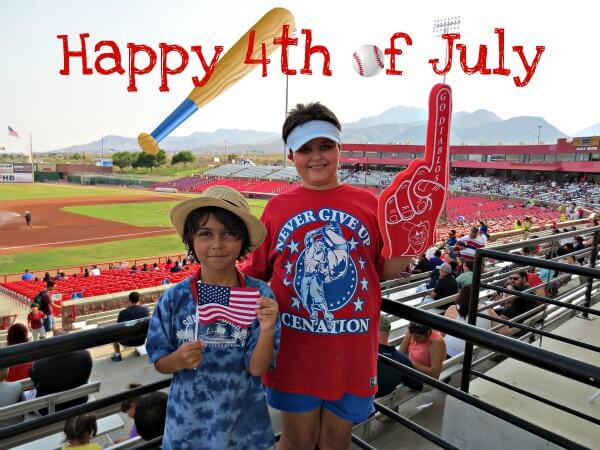 We took in a local baseball game this year to celebrate the 4th of July. You’d probably be surprised that our boys have only been to one other baseball game prior to last night. Both boys enjoyed the night but neither wants to see another game any time soon. They’d much rather hit a local football game where the game moves a little faster.

Have you ever seen a cheer or dance squad at a baseball game? Well we were surprised when the Diablos Diamond Girls were dancing every once in a while in between innings. I looked up cheerleading in baseball and it appears it’s been around since the 90s but hasn’t caught on with the majority of teams. While I can see the need for someone to keep the fans interacting with the game, I’m not sure any one told that to the Diablos Diamond Girls. I only saw them a handful of times and they weren’t as involved with the fans as one would expect.

I was shocked at the limited amount of items in the souvenir shop. Shirts, foam fingers, baseballs, and one style of shot glasses were about the only thing to buy although all were reasonably priced. With easy access to online print shops, I’m surprised there wasn’t more to buy. Mugs, pennants, flags to stick on your car, those fold-up cushion seats with the team logo, photos of players, pens, pencils are just a few of the things that seem like they’d sell easily.

The one thing that stood out to all of us was the family section. The stadium marketing team kicked some major butt by converting the not ideal seating area where your view is semi-blocked and called it the family section. It’s marketed to those families who prefer to enjoy the game in an alcohol free environment.

My only big gripe was the lack of food vendors in the stands. If you got thirsty or hungry, you had to miss the game to get food or drink. Well, unless you wanted a beer because ‘beer men’ were walking around the stands selling it. What’s a ball game without someone selling hot dogs and sodas in the stands?

After the game was over, the players came out to sign autographs right below us. We were 5 rows back behind the dugout so lots of people swarmed our seats to get autographs. The boys didn’t mind it because they were one of the first ones down to get their stuff signed. Drama King got about 5 signatures on his baseball and Little T had a couple players sign his foam finger before he got overwhelmed by the crowd of people. Drama King plans on saving his baseball and starting a collection of balls from all the games he goes to see. Some of the players were even taking photos with the fans. 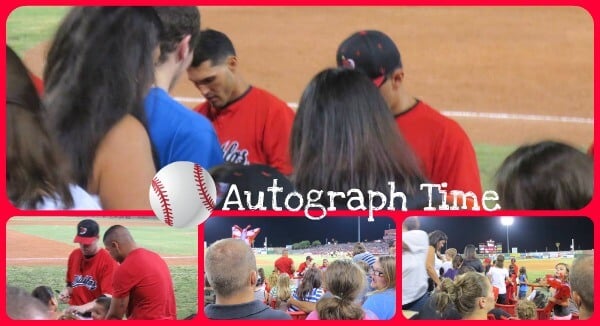 After the autograph session, we settled in to watch what we thought would be an average few minutes of fireworks but we were utterly surprised over 10 minutes later when the fireworks were still going strong. I managed to get a few shots and even a short video of some of the fireworks display.