You may be asking yourself, “Why should I bother to vote? Does my vote count? It’s not likely that there’s going to be a tie and my vote will be the deciding vote. The same people will win whether I vote or not. So why should I vote?” These are good questions, and it is true that the chances of breaking a tie are not good. But there are other reasons to vote and your vote counts in ways you never thought of.

The government doesn’t know who you voted for, but they do know whether or not you voted. They track information for statistical purposes to determine how many young people are voting as compared to other age groups. That way politicians know what age groups to target in order to win elections. 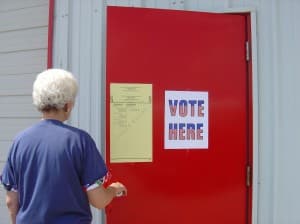 Senior citizens are the most reliable voters. They have the highest percentage of voters of any age group. And because of that, old people get what they want. If you’re running for public office, you better be protecting the interests of seniors because old people will vote you out. On the other hand, younger people plus parents who are just starting a family tend not to vote or don’t vote as regular which can make it not worth a politicians time to put a lot of effort in courting your vote.

The first step is to register to vote and show up to vote on election day. That get’s you in the process. If you don’t want to actually go out to a polling place you can request an absentee ballot too which is what we do.  But there are several other things you can do to. Politicians travel a lot and come to your town. When they do, go there and meet them. When you meet them, tell them what your interested in. Sometimes they actually listen. If you want to be in the right place, go to where the people who are elected are.