Drama King loves playing Legend of Zelda on the NES so I wasn’t surprised when he adamantly insisted he wanted his Halloween costume to be Link this year. The only problem was his size as he barely fits into a size 6 and apparently young kids don’t pick Link as their favorite choice for Halloween. This left us with only one option: Make him a costume.

Link is commonly depicted as a child or teenager of the elf-like Hylian race, originating in the fictional land of Hyrule. Link often travels through Hyrule, defeating creatures, evil forces and the series’ primary antagonist, Ganon, while attempting to save Princess Zelda and her kingdom. To defeat him, Link usually requires the mystic Master Sword and Light Arrows, or a similar legendary weapon, obtained after many trials and battles gathering magical objects or using other items such as musical instruments and weaponry. Several different Incarnations of Link have been introduced throughout The Legend of Zelda series.

Now this is my first EVER attempt at making a costume so I used stuff we had around the house along with a few items you can pick up at dollar stores (Dollar Tree, 99¢ Only Stores , etc) or from dollar sections at stores like Wal-Mart or Target. Adjusting the weapons, you could also be Robin Hood or one of the other elf warriors in this no sew costume.

Step 1: The Base Look

The green shirts were picked up at the 99 cent only store about 5 years ago to use as sleep shirts for Little T. I never expected the shirts to last so long.

Sword – Link typically carries his sword on his back so you can either tuck the sword into the white shirt or sling something across your back to hold the sword. In the photos we used a tripod carrying case with paper stuffed into the bottom to make sure the sword handle stuck out the top. You could tuck it into the belt if you prefer.

Bow & arrow set – If the arrows have a belt holder, put it on the belt. If not, put the arrows in the same cases as the sword. Sling the bow over your shoulder.

Shield – Completely optional but if you are trick or treating, it might be easier to skip this item and make the trick or treat bag look like a shield. One idea would be to trace a shield on poster board, color and design it like Link’s shield, cut it out and hot glue it to the lower half of a white pillowcase.

Elf ears – Link is an elf so picking up elf ears would help round out the look but these can sometimes be costly or not have the right fit so we skipped this part of the look.

Dirty Blonde Long Wig – If you don’t have long brownish blonde hair, a wig can help pull it all together.

Magic potion bottle – Use a small plastic bottle with a potion label and attach to the belt.

Wand – Tuck a magic wand into the belt.

That’s it! See it was super simple with very little out-of-pocket expense. Of course you can spend a bit more and make the costume more realistic but mostly the basics worked for our little guy as you can see. 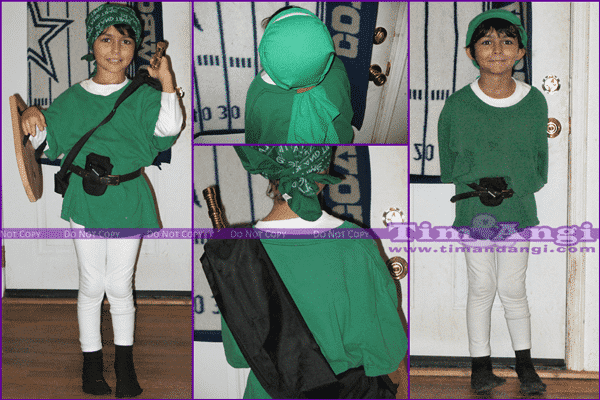 Drama King is super soft-spoken so I fully expect to explain his outfit. Maybe I’ll print out a small business card for him to hand out with an image and description of the character.

[…] guys and girls entertained for a long time. While you’re in the creative mood, why not make this no-sew costume to go with these swords? And don’t forget to follow Duck Tape on Twitter and Facebook for more […]

[…] King wanted to be Link from Legend of Zelda for Halloween. Sadly we couldn’t find a costume in his size. After researching, we took the plunge and made […]

He looks Great! Awesome way to create and save money at the same time =)

Thanks! I’m working on his trick or treat bucket doubling as the shield.

Awesome! My husband is going to love how easy this is. He thinks Link is the coolest