Snow: Atmospheric water vapor frozen into ice crystals and falling in light white flakes or lying on the ground as a white layer.

Snow. What’s snow? That was a common joke I made when people from other places said it was snowing where they lived. We rarely saw snow unless we went to the mountains. It only snowed twice since I can remember where it actually stuck to the ground.

Then we moved one state over. Now I’ve seen more snow in one year than in my entire lifetime prior to the move. 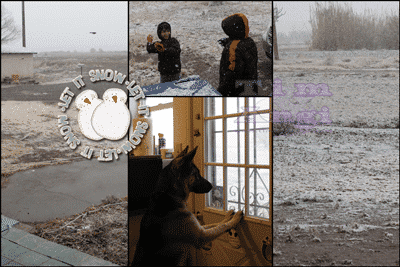 This was at the beginning of the snow and eventually, the ground was pure white. Well until the three dogs and two kids went outside and played. And played. And made snow angels. And played until they were frozen. They came inside and warmed up with some hot cocoa in front of the heater.

I can certainly say I am not a fan of snow. I hope this is the only time we’ll see snow this holiday because I’m not a fan of driving in the white stuff. I don’t even like to drive when it rains.

But someone keeps standing at the window like this… 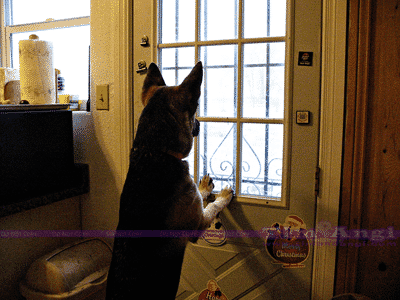 telling me she NEEDS to go play. The other two dogs would prefer to remain inside but the puppy wants outside constantly. It must be a kid thing!